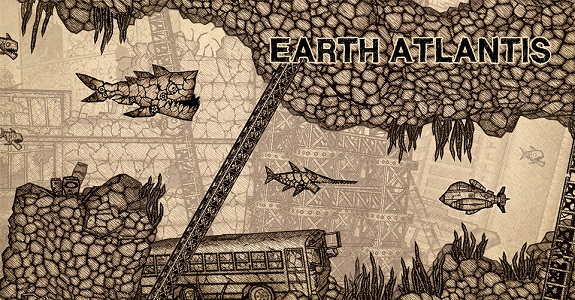 Yesterday, during the second Nindies Showcase livestream (the Nindies Summer Showcase), Nintendo had quite a lot of indie games to announce for the Nintendo Switch. One of them is called Earth Atlantis, and it offers a surprising mix of Monster Hunting action with a “traditional” sidescrolling shooter.

The game is about the “Great Climate Shift” that happened at the end of the 21st century.

Following that cataclysm, nearly 60% of the Earth’s surface is now underwater, and human civilisation has fallen. But the most interesting change involves machines, that have taken the shape and form of marine fauna, and the oceans now happen to be filled with those creature-machine hybrid monsters. In this game, you get to play as a Hunter, who is trying to hunt those very monsters.

Earth Atlantis is described as a sidescrolling shooter with “Monster Hunting” gameplay. You get to hunt down the dreadful sea monsters mentioned above, and explore a post-apocalyptic underwater world. There’s various ships for you to unlock, each with their own special weapons and abilities.

An interesting aspect of the game is that it features an “old sketching” art style, which aims at expressing the essence of 14th century ocean exploration, when the oceans were considered a dangerous place filled with monsters.

Finally, here’s a trailer and some pictures:

Earth Atlantis (Switch – eShop) comes out this Fall in Europe and North America. The Upcoming Games page has been updated!