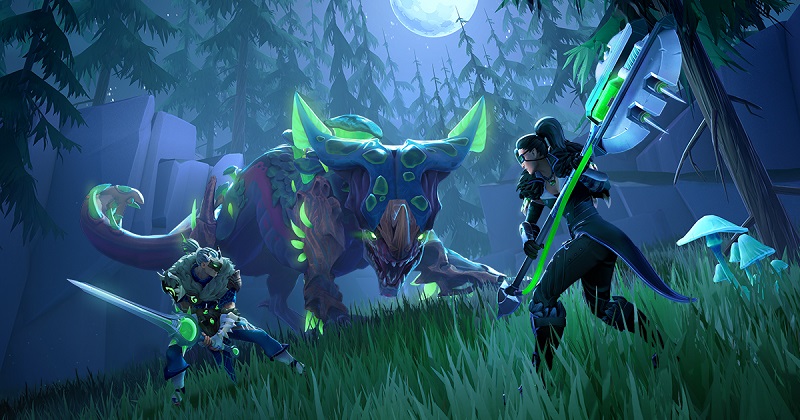 On this page, you will find all there is to know about the various Software updates for Dauntless on Nintendo Switch (originally released on December 10th 2019 in Europe and North America)!.

No patch notes available yet. This update brings the following to the game:

The Ramsgate we know today is not the first one of its name. Explore the ruins of old Ramsgate in Gauntlet, a brand-new endless game mode which allows you to earn weapon trackers and new cells.

Race against time as you take on level after level of challenging hunts amid the ruins of old Ramsgate. Utilize unique arena perks to optimize hunts with your guild. Only the most valiant guilds will find a place on the Gauntlet leaderboard and earn coveted rank-based titles each season.

Unlock Gauntlet hunts at the final milestone of the Slayer’s Path. How high can your guild climb before the end of the season?

Bring the Crests you earn from Gauntlet hunts to Dr. Priyani’s Research Lab and trade them in for a variety of weapon trackers and three brand-new cells.

Each weapon can hold up to three trackers, allowing you to track your achievements and show off your skills as a Slayer. Tracked stats will display for all players in the nameplate above your character’s head.

The portal driver is a mysterious device found in the shadows of the Umbral Deeps. It saved the people of Ramsgate not long ago, but at what cost?

Activating the portal driver opened a portal away from the sundered city, but it also knocked the entire aetheric spectrum off-balance. The Agarus took root in a Farslayer homeland. The Urska awoke from a long slumber. The Chronovore appeared. The Thunderdeep Drask returned from extinction. New evolutions, like the Frostwülf and the Fenroar. New variants like the Lightbound Boreus. The surge of radiant aether. All of this was connected to the imbalance of the aetheric spectrum.

Ramsgiving returns to the Shattered Isles. Speak to Honest Ozz in Ramsgate to learn more about how you can celebrate Ramsgate’s namesake this year.

In addition, Benson the beloved ram has now found a new place of rest in Ramsgate Plaza. Help him dethrone his long-time rival, King Gruk, in two new event missions. Each mission will reward Slayers with event currency and a heavy bag of rams.

Ramsgiving runs from November 17 to December 1.

Kat continues to investigate Granny Strega’s cryptic warnings. But are the Slayers of Ramsgate too late to stop whatever danger is on the horizon?

Be on the lookout for new bonus events that will run from now until the end of the year. Each of these minor events will be linked to a character in Ramsgate, offer bonus progression, and a temporary repeatable quest.

For example, during Dr. Priyani’s Research event starting November 11, you will get double weapon experience from Behemoths. Plus, you can complete Priyani’s repeatable part-breaking quest to earn more rams.

No patch notes available yet.

A Krolachi warrior has been exiled to Hades Reach. Help him complete his Wild Hunt and reclaim his honour. However, be wary of the Krolachi Seer, the leader of the exile’s former clan. She may have other plans! Slayers can only access this adventure once they’ve unlocked the Reforge node on the Slayer’s Path. Each of the island adventures is intended to give Slayers new ways to uncover stories about the Shattered Isles, while boosting weapon experience at key moments in progression.

A shadow has settled over Ramsgate. Speak to Honest Ozz in Ramsgate to learn more about how you can participate in this year’s event.

Additionally, mysterious notes with strange markings have appeared in a dark corner of the city. Uncover the notes’ meaning and you may get an even closer look at the workings of the Unseen. Some say this is the only way to unlock the free Unseen Neophyte Hunt Pass.

The Shattered Isles are not for the faint of heart. It’s difficult to build a life while battling both Behemoths and the natural elements. But the Krolachi, like some ancient cultures, have found a way to live within the dangers of the world — as part of it.

Kat’s investigation into the growing imbalance of the aetheric spectrum continues with haste. Arkan Drew believes that using the Portal Driver to save the citizens of Ramsgate may have had some unintended consequences.

How to download updates for Dauntless for the Nintendo Switch?

To download the updates for Dauntless, you have three options: