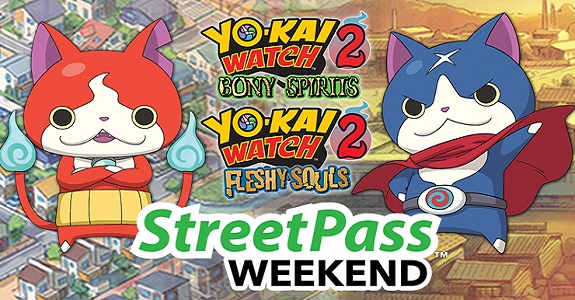 To celebrate the launch of Yo-kai Watch 2: Bony Spirits / Fleshy Souls on September 30th, there will be a National StreetPass Weekend on September 30th and October 1st, in the United States. As usual, you will be able to get StreetPass tags from all over the country when you go to a Nintendo Zone.

With the recently released Dragon Quest VII: Fragments of the Forgotten Past and the latest StreetPass Mii Plaza game, the timing of that National StreetPass Weekend is just perfect!

Paper Mario: Color Splash comes out in exactly two weeks in Europe and North America, which means it’s now available for pre-load… but only in North America. You can pre-purchase and start downloading the game right now, in order to be able to start playing at 12AM EST (October 7th) / 9PM PST (October 6th)!

You can do so straight from the Nintendo eShop, or from Nintendo’s website. Unfortunately, pre-purchasing and pre-loading are not available in Europe…

ASH is a RPG Circle Ent. has localised for the western markets. Unfortunately, it’s still not available in Europe, but at least, there’s a good reason for that. The developers have actually been fixing known issues with the game, reported after the North American launch. Unfortunately, we don’t know if that version will then be updated with the fixes from the European version…

This year, the Nintendo 64 turned 20. To celebrate this 20th Anniversary, Retro Gamer are releasing “The N64 Book”.

We celebrate the 1996 release of the Nintendo 64 with an incredible new book.

Celebrate 20 years of the Nintendo 64 with our brand new book. We’ve not only opened the Retro Gamer vaults to gain access to our very best features, but have also created brand new content that’s never before been featured in the magazine. From Super Mario 64 to Turok: Dinosaur Hunter, every key N64 game is covered.