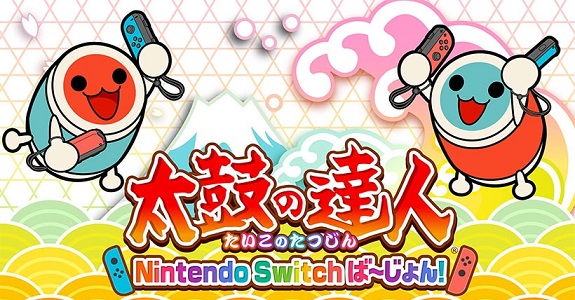 Last week, Bandai-Namco revealed the tracklist for the European and North America version of Taiko no Tatsujin: Drum ‘n’ Fun, which happens to be pretty much identitical to the Japanese one:

Last week, Warner Bros. announced a “new” Scribblenauts game for the Nintendo Switch: the Scribblenauts Mega Pack, which is in fact a bundle including both Scribblenauts Unlimited and Scribblenauts Unmasked: A DC Comics Adventure (but also some bonus content for both games). It will be released on September 18th, and will cost £24.99.

Here’s details about both games:

Scribblenauts™ Unlimited fosters unlimited creativity, exploration and social elements that create a fun experience for fans of all ages. The game features a huge side-scrolling open world with high-definition, hand-drawn scenery and objects where players can help the game’s hero, Maxwell, solve robust puzzles and challenges by summoning any object they can imagine. Scribblenauts™ Unlimited has been updated with two new bonus levels, supports online sharing of user-created objects, updates two-player mode, and features a new easy-to-use “sunflower” style text entry system. The new Zed Zeppelin level lets players battle sky pirates and work with crew members to keep the dirigible safe while the new Land of Sweet Hyperbole level allows players to drive around in a candy car and interact with candy neighbours.

Scribblenauts™ Unmasked: A DC Comics Adventure melds the boundless creativity of Scribblenauts™ with thousands of DC characters and objects – all drawn in the distinctive Scribblenauts™ art style. In the game, Maxwell comes to the aid of the mightiest DC Super Heroes BATMAN™, SUPERMAN™ and the rest of the JUSTICE LEAGUE™ as they face the fiercest DC Super-Villains, such as THE JOKER™, LEX LUTHOR™ and SINESTRO™. Fuelled by the player’s imagination, where anything they write comes to life, Maxwell must use his magic notebook to summon heroes and tools to stop the villains’ evil schemes and save the universe. In his imaginative and comical quest, he must travel to iconic DC locations such as GOTHAM CITY™, METROPOLIS™, ATLANTIS™ and two new bonus locations, TITANS TOWER, under attack by the formidable demon Trigon, and BELLE REVE, the base of operations for the Task Force X. Scribblenauts™ Unmasked: A DC Comics Adventure has also been updated with hundreds of new DC characters, objects and costumes.

Scribblenauts Mega Pack (Switch) comes out on September 18th in Europe and North America. The Upcoming Games page has been updated!

Earlier this month, Revolution Software and Ravenscourts announced that Broken Sword 5 – The Serpent’s Curse was coming to the Nintendo Switch next month. It will be released on September 21st, and will cost 29.99€ / £24.99. The Nintendo Switch version will feature never-seen-before Behind the Scenes movies, as well as an innovative new user interface.

Paris in the spring. Shots ring out from a gallery. A robbery – a murder – and the beginning of another epic original Broken Sword adventure. An adventure that will hurl intrepid lawyer George Stobbart and sassy journalist Nico Collard onto the trail of a murderous conspiracy whose roots lie in mysteries older than the written word. Armed only with logic, integrity and a wry sense of humour – can George and Nico outwit evil forces both ancient and modern and save mankind from disaster?

The game includes Behind the Scenes movies created especially for the Nintendo Switch version. Unlocked as play progresses, these videos reveal the story and the development process behind the game, through previously unreleased interviews with the Broken Sword team.

Mixing cerebral puzzling, sharp wit, with historical authenticity and intrigue,  Broken Sword 5 – the Serpent’s Curse has secured its place as a favourite with fans of the series, whilst also winning over a new generation of players.

Broken Sword 5 – The Serpent’s Curse (Switch) comes out on September 21st in Europe and North America. The Upcoming Games page has been updated!

Here’s the first making of video for Little Dragons Café:

Last week, Musynx received a Software update: it brings the game to Ver. 1.1.1, and adds the following:

And here’s the preview video for the new songs:

Here’s a picture of the manual for Blade Strangers:

Here’s the latest video for V-Rally 4:

Here’s the recordings of the segments dedicated to Mega Man 11 from the latest episodes of Capcom TV:

Here’s the recording of the segment dedicated to Street Fighter 30th Anniversary Collection from the latest episode of Capcom TV:

Here’s the recording of the segment dedicated to Okami HD from the latest episode of Capcom TV: