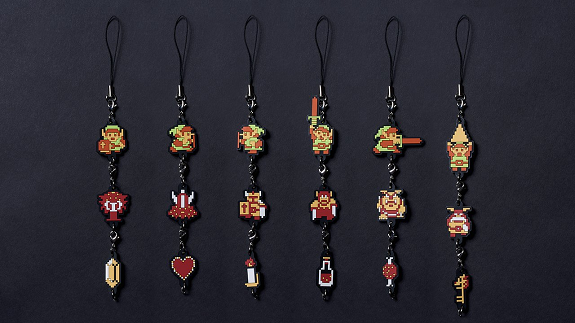 Yesterday, SEGA announced that from now on, they would publish Atlus USA’s games. This is basically the conclusion of SEGA’s acquisition of Atlus, which began in 2013. For fans, nothing will change: Atlus USA will keep on operating independently, as usual, with no impact on localisation or the brand itself (which will still be used). But for SEGA, this change will allow them to streamline their business operations.

Also, SEGA announced that Ivo Gerscovich was the new head of the Sonic brand and its related businesses in North America, Europe, the Middle East, and Australia. He will also serve as both the Sonic chief brand officer and senior vice president of Sega of America.

The Legend of Zelda

In July, empty will release some pretty neat The Legend of Zelda rubber straps in Japan. There’s two kinds of rubber straps:

Yesterday, IGN published an interview with Bill Trinen about:

If you’re planning to get Bravely Second: End Layer from Amazon.com, you should know that you will get a download code for the Al-Khampis Costume Set DLC. Click here for more details!

For April Fools’, the Squid Research Lab revealed a portable gaming booth, which allows 4 players to have fun with Splatoon pretty much anywhere. If you buy two, you can have heated 8-player matches, too!

Here’s the latest batch of screenshots and artworks for Yo-kai Sangokushi, which comes out tomorrow in Japan:

Shin Megami Tensei IV Final came out on February 10th in Japan, and got quite a lot of DLC content already. Today, Atlus uploaded a video showcasing all the additional content available so far:

And here’s another promotional video:

Here’s some gameplay footage for the Nintendo 3DS version of Mario & Sonic at the Rio 2016 Olympics, which comes out on April 8th in Europe:

Here’s some screenshots/artworks for the latest batch of Monster Hunter X / Generations Event Quests (featuring the Devil May Cry and Macross collaborations), available today and next week:

Talking of Monster Hunter X / Generations, another collaboration with Monster Hunter: The Real at the Universal Studio Japan theme park started today. Until June 26th, you can get some exclusive Event Quests for the game, which allow you to get some pretty rare gear.

Interested in some Mega Man “Backpack Hangers”? Capcom will release some in May, with:

Here’s the… err… latest “card” from the 4th series of Fire Emblem 0 cards (which came out last month in Japan):

Totally not an April Fools’!

In this photo provided by Nintendo of America, Nintendo worked with the San Francisco Public Library to host an event on March 30 at The Mix space in SFPL’s Main Library to teach San Francisco-based kids about the basics of video game level design using the Super Mario Maker game. Attendees were also able to play Super Mario Maker on the Wii U console with game experts from Nintendo who instructed kids how to design, play and share their own Super Mario Bros.-themed levels. (Alison Yin/AP Images for Nintendo of America)

In this photo provided by Nintendo of America kids work with Nintendo game expert Katie Casper to create their own Super Mario Bros.-themed level in the Super Mario Maker game for the Wii U console. On March 30, Nintendo hosted a workshop at The Mix space at San Francisco Public Library’s Main Library location in Downtown San Francisco that taught kids the basics of video game level design. (Alison Yin/AP Images for Nintendo of America)

In this photo provided by Nintendo of America, kids play levels they created in the Super Mario Maker game during a workshop on March 30 that was hosted by Nintendo at The Mix at San Francisco Public Library’s Main Library location in Downtown San Francisco. Throughout the workshop, Nintendo experts taught kids about the basics of video game design using the creative tool set available in Super Mario Maker for the Wii U console. (Alison Yin/AP Images for Nintendo of America)

In this photo provided by Nintendo of America, kids gather at The Mix at San Francisco Public Library’s Main Library location in Downtown San Francisco to attend a workshop that taught the basics of video game level design using the Super Mario Maker game for the Wii U console. With the help of Nintendo experts, attendees designed and played through their own Super Mario Bros.-themed levels by leveraging the creative tools available within the Super Mario Maker game. (Alison Yin/AP Images for Nintendo of America)