Today, two new interviews of Yasuhiro Mukae were published (on Engadget and Kotaku). You may not know who that person is, but you’ve probably heard about their game: BoxBoy!, available since last month on the Nintendo 3DS eShop.

In the Engadget interview, Yasuhiro Mukae explains that development for BoxBoy! lasted roughly 1 year and a half. The team  spent around 6 months just experimenting, and then the development proper took a full year.

It all started when the company decided to field game design concepts with brand new characters, and not Kirby. Yasuhiro Mukae actually had the idea of BoxBoy! even before that, so this was the perfect opportunity to turn it into a full-fledged project.

When designing games, HAL Laboratory generally come up with ideas that go with the gameplay. For example, Qbby (the main character in BoxBoy!) looks like a box precisely because of the gameplay (like the various tricks you can use to move across the levels).

Apparently, they did consider featuring Kirby in the game, but they had a hard time making sure that having the fluffy pink balls create boxes wasn’t weird or unnatural. In the end, they thought that the original design, from the early stages of development, was the best.

As for the very sparse visuals, one of the reasons the developers went with those is because they wanted to differentiate BoxBoy! from the other HAL Laboratory games (mostly Kirby titles, with very colourful and cheerful visuals).

That being said, both Kirby games (especially Kirby and the Rainbow Paintbrush) and BoxBoy! have something major in common: intuitive, easy-to-grasp controls. Since creating boxes is pretty much the central element of the game, it was very important for them to come up with easy controls.

In Kotaku’s interview, Yasuhiro Mukae explains that HAL Laboratory isn’t necessarily bound to Kirby: it’s certainly their main development focus, but that doesn’t mean it’s all they’re working on. In fact, they have several projects in the work that does not involve the fluffy pink ball, in parallel to their Kirby projects (along with a few experimental projects, similar to BoxBoy!).

Finally, here’s some concept-art for the game: 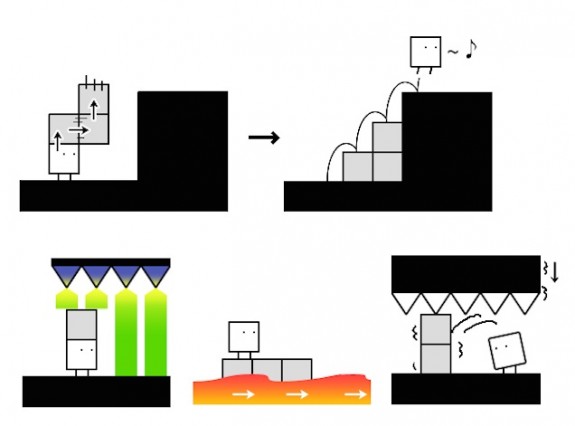 For the rest of the interviews, please click on the Source links below!