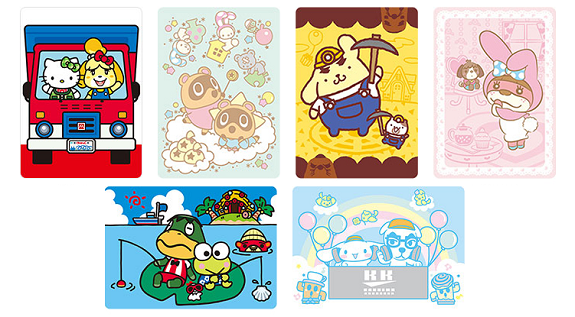 And today, Nintendo announced a special collaboration with Sanrio, in Japan. On November 3rd, Nintendo will launch special packs of amiibo cards. Those packs include the following:

But what’s interesting about the cards is that they’re unique. There’s 6 of them, and they all feature a specific animal. Just like other cards, when you scan it in Animal Crossing: New Leaf, the animal will come live in your village. It will bring its own furniture, in its camping car.

What makes those 6 cards so special is that the furniture is based on a famous Sanrio character: Hello Kitty, Pompompurin, Little Twin Stars, My Melody, Keroppi, and Cinnamoroll. About the seals included in the packs: they feature a special illustration with a famous Animal Crossing character and one of the Sanrio characters:

Unfortunately, there’s a catch: the Sanrio characters will not appear in the game, just the special furniture.

Here’s what the cards, the seals, and the packaging look like:

Finally, here’s a promotional video for this collaboration:

Those special packs of Animal Crossing amiibo cards will launch on November 3rd in Japan, on the same day as the regular new packs.