Earlier this afternoon, Bandai-Namco announced that the Wii U would get a third Taiko Drum Master game this year. It’s called Taiko Drum Master: Atsumete ☆ Tomodachi Dai Sakusen!, and will be available on November 26th in Japan. Following this announcement, Famitsu published an article with some additional details. 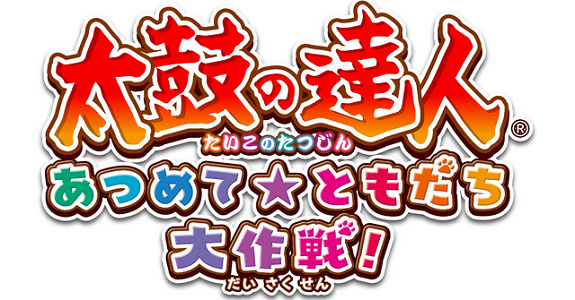 First, we learn that to celebrate the 15th Anniversary of the Taiko Drum Master series, Studio Ghibli is going to make a special short. But that’s not all: Taiko Drum Master: Atsumete ☆ Tomodachi Dai Sakusen will also get a special bundle at launch (replacing the regular game + controller bundle for the first print).

The game will have two editions:

Here’s the packaging for the bundle, but also an artwork for the game itself and the short:

On the box, there’s some small details, such as a (blurred) list of tracks (with anime and J-pop songs), but also a visual of the contents of the special bundle. But the most important element on the box is the amiibo logo, which confirms that Taiko Drum Master: Atsumete ☆ Tomodachi Dai Sakusen! will be compatible with Nintendo’s NFC figures (not surprising for Bandai-Namco).

Of course, we do not have any more info on the amiibo functionality, but it’s pretty much guaranteed that only a small selection of figure will effectively be compatible. They will most likely unlock a special costume for Don-chan and song(s) from their respective game. With the Super Mario Bros. series celebrating it’s 30th Anniversary this year, a big Mario medly would be more than appropriate!