Last week, Nintendo and Square-Enix announced that total shipments (+ digital sales) for Octopath Traveler had topped 1 million units: a great performance for the retro JRPG by the producers of Bravely Default. To celebrate, they shared a special artwork showing the 8 travelers: 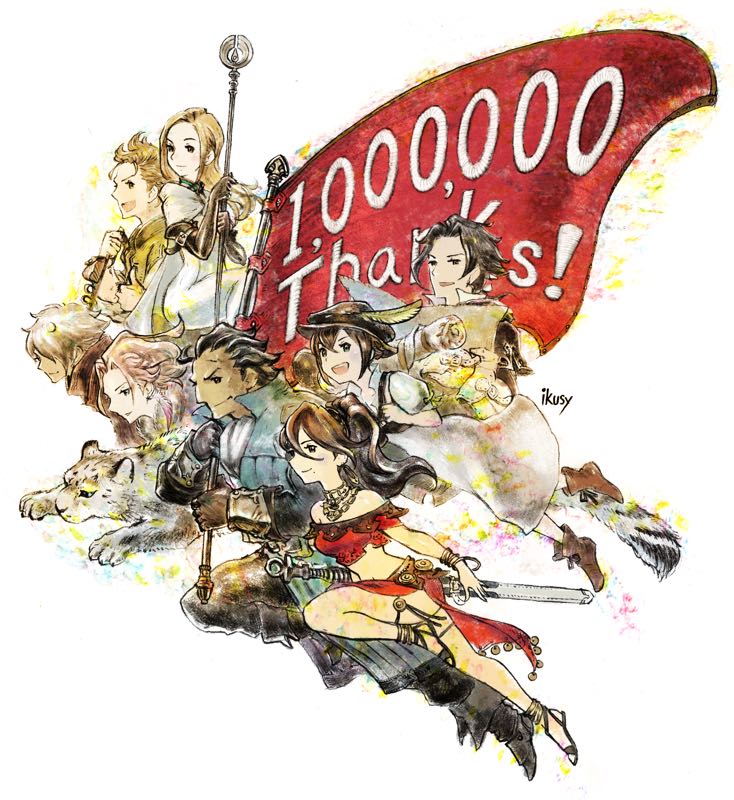 What’s interesting about this illustration is the overall shape of the characters + flag: some fans claimed this totally was the same as Airy’s from the key artwork used for Bravely Default. This seemed rather farfetched at first, but it turns out it actually wasn’t all that farfetched.

As you can see, fans definitely were not seeing things when they thought the shape of the characters and the flag was similiar to Airy’s on the Bravely Default key art.

The tweet didn’t have just the illustration: it was also accompanied by the following blurb:

We’ve already announced it, but…

But that’s not all: the account also got a new name: ブレイブリー◯◯◯◯◯ (Bravely ◯◯◯◯◯), as well as a new avatar (that has been used on Facebook for a while by the Asano Team):

The text in latin reads “Ad Spes Respondere”, which could be translated as “To respond to hopes”. That same crest can be seen in the first trailer for Octopath Traveler (thanks norfair for the heads up!):

Right now, it’s not clear what this teaser is all about, but it looks likely something Bravely is in the works: new game and/or port of the first two games, possibly? Hard to tell at the moment, but if Square-Enix has already started teasing something, that means an announcement is most likely coming in the (near) future. One thing that’s (almost) for sure: since this teaser is directly linked to Octopath Traveler, it most likely is something for the Nintendo Switch. But again, no guarantees!