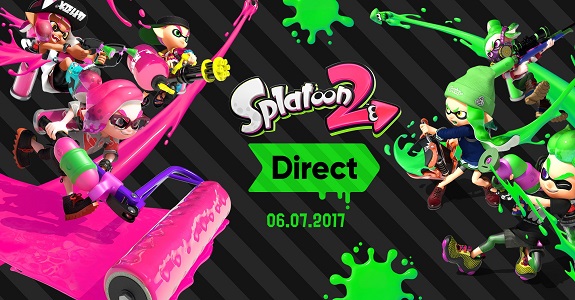 Today, Nintendo streamed a brand new Nintendo Direct presentation, entirely dedicated to Splatoon 2. It reviewed most of the previously revealed details, but also had quite a lot of new info.

Missed it? No problem: you can now watch the full recording on YouTube:

The presentation begins with a reminder: Splatoon 2 offers even more options for your Inkling, and more specifically their skin tone and eye colour. But this time around, you can also change the hairstyle, and legwear too.

On the plaza, there’s a place called Galleria, where several Gear and weapon shops can be found. Here’s a quick rundown of the shops you can find there:

Next, several new (and previously revealed) weapons were showcased:

About Special Weapons, the presentation reminded forgetful Inklings that all of them are brand new. Yup, that’s right: no returning Special Weapon… so far, at least. There’s also a change with the UI, which now displays clearly when a player has their special gauge filled (the icon for that particular player glows).

Here’s some of the new Special Weapons to be fond in the game:

About Ranked Battles, Splatoon 2 will change things up: there’s now a separate rank for each mode (Tower Control, Splat Zones, and Rainmaker). Also, it’s now possible to go up 2 or more ranks at a time, depending on your performance: grinding to the top will not be as tedious at the beginning!

Next, we have League Battles: a special mode that allows you to play with your friends. You can team up, and battle your way to the top of the charts. You can chose to either partner up with a friend to form a pair, and then get paired with another pair, or make a team with 3 other players.

Battles play out over 2 hour periods (or until the stages change). Your score is based on your win and losses during that period. You can earn medals in that mode.

Next, here’s some of the new Gear Powers introduced during the presentation:

Also, you can check out the Gear other players are using in the map screen, at any time during battle.

About Salmon Run: it was revealed you could only play this mode online during specific periods of time. We also got a look at some new Boss Salmonoids:

There’s also special “events” during Salmon Run: the tide can change, fog can come and block your vision, and at night, Salmonoids rush at you with incredible speed.

The next segment from the presentation detailed SplatNet 2: a service that’s part of the Nintendo Switch Online app (for smart devices). Thanks to this app, you can check the following:

But that’s not all: you can also invite other players to battle, including via Social Networks, and use voice chat with your friends during battles. The Nintendo Switch Online app will be released on July 21st, alongside the game.

Finally, here’s a rundown of various tidbits revealed during the presentation:

The presentation ended with some really exciting announcements, though both were expected. The first one: the game will get regular updates, with new weapons (such as the Splat Brella, that allows you to block enemy attacks, slide on ink… but cannot be used for a few moments after use), or the Bubble Blower (a special weapon), new gear, and even new stages.

Finally, we have Splatfests: they work just like in Splatoon, as in you first choose a team, and then battle to make that team win. There’s always a team, and you choose your team based on that theme (for example: Cats vs Dogs). And for the first time, you will be able to fight alongside your friends, on the same team (even if you didn’t pick the same team, presumably).

As a bonus, the Splatoon 2 Direct introduced Off the Hook, the new “Squid Sisters”, made of Marina and Pearl. They have their little concert during Splatfest, and they also make various announcements like the Squid Sisters used to do.

The theme will be Cake vs Ice Cream in Europe and North America, and Rock vs Pop in Japan. In case you haven’t noticed simply by looking at the time, each Splatfest runs separately in each region, which is most definitely going to be the case of most Splatfest (with worldwide one being the exception). Nintendo is planning to have new Splatfests for 2 years.

To take part in this Splatfest, you need to download the special demo from the Nintendo eShop. Unfortunately, said demo isn’t available as of writing!

Here’s a video introducing Off the Hook, and their first song “Full Throttle Tentacle” (called “Ebb & Flow” in English):