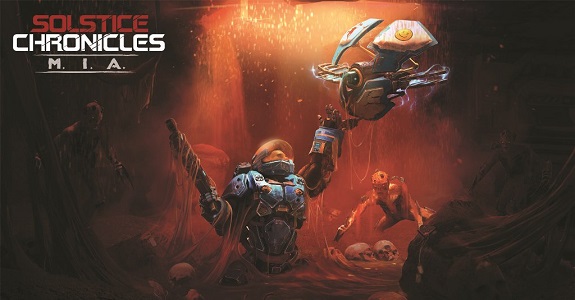 Today, Circle Ent. announced another game for the Nintendo Switch. Fans of top-down shooters are going to be pretty happy about this announcement, because the game is none other than Solstice Chronicles: MIA (from Ironward).

For those of you who never heard of the game before, Solstice Chronicles: MIA is an isometric shooter featuring “intense action” and “tough enemies”, originally released last year on Steam. Alongside the action, the game also features strategic play, with an accompanying drone you have to manage. For example, you can decide to either scavenge for supplies, or push forward.

Of course, there’s upgradeable weapons to destroy enemies with: shotguns, rocket launchers, autocannon, flamethrower, and more. There’s also four classes to choose from, each with their own skill tree: Assault, Demolition, Hellfire, and Terminator.

The game can be played in Single Player, or with a friend in local co-op.

Here’s what the story of Solstice Chronicles: MIA is all about:

In a dead colony on Mars a corporate marine is left far behind enemy lines. With the unlikely help of an insurgent drone, he faces a battle for survival against an army of murderous, mindless mutants… and worse things.

Our marine finds themselves on Mars as a result of Earth being overrun by the STROL virus. Despite humans colonising Mars and with corporations naturally taking over, it is a violent and dangerous planet. Corporations and insurgents both race to find a cure for the STROL virus in order to reclaim Earth. As the virus spreads in the colonies, creating hideous monsters in the process, the battle for the cure is more important than ever!

Solstice Chronicles: MIA (Switch – eShop) comes out later this year in Europe and North America. The Upcoming Games page has been updated!