Months go by, and the Nintendo Switch just keeps on reaching new sales milestones. Famitsu have just released an early sales report to announce that Nintendo’s console has now sold over 25 million units since launch in Japan. It was at 24.951.968 units sold as of June 5th, which means it sold 58,436 additional units during Week 24 (down from 61 000 units during Week 23).

Here’s the sales breakdown for the various models: 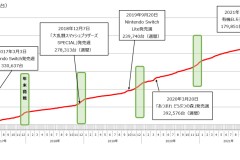 And as always, Famitsu shared the list of best-selling games alongside this new milestone. Here’s the Top 5 best-selling Nintendo Switch games at retail:

Unfortunately, those sales numbers are as of June 5th (Week 23), which means we can’t calculate the difference with Week 23 data to get sales numbers for Week 24!