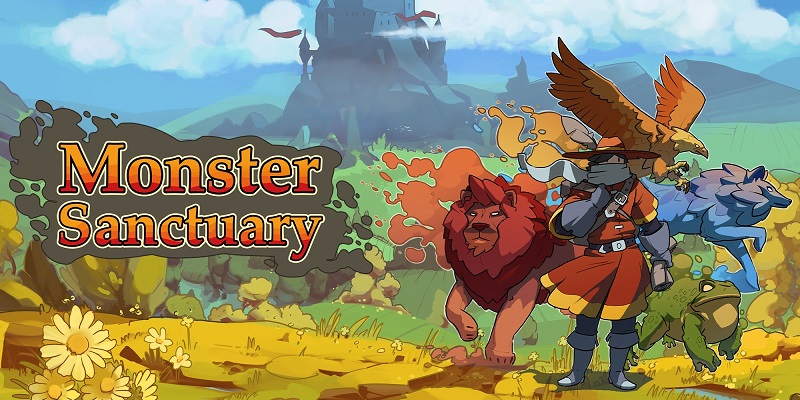 On this page, you will find all there is to know about the various Software updates for Monster Sanctuary on Nintendo Switch (originally released on December 8th 2020 in Europe, North America, and Japan)!

All of them can be combined with each other and New Game+. The existing difficulty modes (Casual, Normal, Master) will also work with these new game modes! These are not recommended for beginners.

The first of the two big new features coming to Monster Sanctuary: New Game Plus mode! This mode is unlocked once you have completed the main story content of the game at least once. When you choose NewGame+ from the starting menu, you have to select any of your existing save games – this will determine the extra Monsters and items available to you at the start. You can then start your new save file on the same save slot or on any other save slot.

Here are the full details of New Game Plus:

We are adding two new difficulty modes to Monster Sanctuary (with the current difficulty of the game taking the role of the “Normal” difficulty that is chosen by default). They are called “Casual” and “Master” mode.

Here are the details of how these two new modes work:

The new Casual mode aims to alleviate the difficulty curve of our game. However, it’s only a slight decrease in difficulty, which means that players will still need to engage with our skill systems and think about their strategy in order to succeed.

The new Master mode was primarily designed with New Game Plus in mind. It is balanced towards providing veteran players, who have loads of additional options available to them thanks to NG+, a new, harder challenge. While it is technically possible to beat the game on Master mode with a regular save file, we highly recommend using this mode in conjunction with New Game Plus (preferably using an optimized team of six Shifted Monsters).

This update also comes with a variety of changes aimed towards making the PVP mode more enjoyable! For one, it comes with a new

PVP Matchmaking system. Here are the nitty-gritty details of how the new matchmaking works:

With this first update patch, we’ll also start a new PVP Season in Monster Sanctuary. This means that all players are starting in Bronze league again, which will allow you to once again get rewards for ascending to the higher PVP leagues.

This update features many balancing changes of Monsters, skill trees, and skills – almost all of which were made explicitly with the PVP meta in mind. We hope that these changes will shake up the current team compositions and open up new competitive options.

How to download updates for Monster Sanctuary for the Nintendo Switch?

To download the updates for Monster Sanctuary, you have three options: