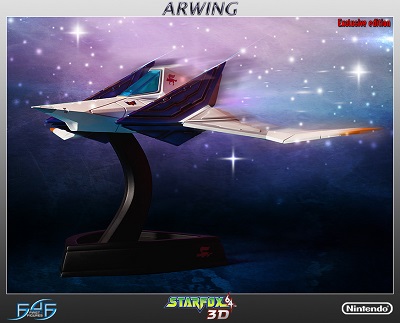 Do you like Star Fox? Have you ever dreamt of a nice Arwing statue? Do you have (a lot of) money to spare? If the answer to those three questions is “Yes”, then you’re going to love the latest First 4 Figures statue, revealed yesterday. It’s based on the Arwing, from Star Fox 64 3D. It was made using the original game files as basis, with modifications by Victor Hugo.

Here’s the official description of the statue:

First 4 Figures is proud to present the first piece in a brand new line of collectibles: The Arwing! Initially made famous in the SNES game Star Fox, Team Star Fox’s Arwings have seen many a battle throughout the Lylat system, and are presented here in its appearance in the game Star Fox 64. The Arwing itself is suspended upon a base bearing the Team Star Fox insignias. Painted completely by hand and cast in high quality polystone, the Arwing measures a total of 12″ inches tall by 12″ deep by 18″ wide.

Comes in deluxe full-colour packaging, moulded foam interiors, hand-numbered base and includes a card of authenticity that allows you to continue collecting the same product number throughout the Star Fox series.

Since there’s quite a lot of them, we put the pictures for both versions after the break!

Here’s the pictures for the exclusive edition:

The statue should be released sometime in Q4 2016.