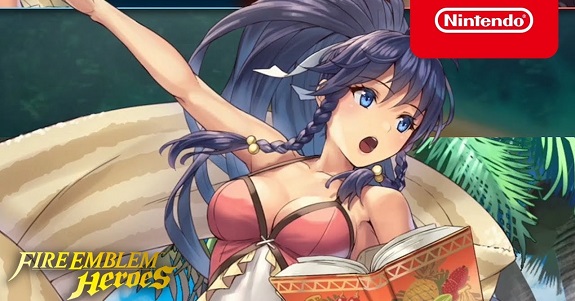 Looking forward to the next set of Special Heroes for Fire Emblem Heroes? Good news: that’s exactly what the next Summoning Focus, going live on Thursday (June 21st), brings! It’s called Summer’s Arrival, and ss usual, it will be available for a full month (until July 25th to be precise), leaving you ample time to try and get your favourite Heroes!

With such a title, and with the season starting this very week, it’s no wonder that this Summoning Focus would feature more Summer-themed Heroes in their dashing, 100% appropriate for battle, swimming suits. There’s 4 Heroes featured this time around, and the developers did not save one for an upcoming event like they’ve been doing recently.

Here’s the trailer introducing this new Summoning Focus and its Special Heroes (English and Japanese versions):

As usual, this new Summoning Focus will bring a new set of Story Maps, and more precisely a new Paralogue also called “Summer’s Arrival”.  It will feature the regular set of 3 maps.

Finally, a brand new set of Daily Log-in Bonus will go live alongside the Summoning Focus, on June 21st. It will run until July 6th, and will allow you to get the usual extra Orbs (13 in total).

As usual, keep an eye out on the Events and Content Updates and Characters pages to keep up to date with all that’s happening in Fire Emblem Heroes!