PQube have announced yet another game for the Nintendo Switch: Ciel Fledge. It’s described as “wholesome simulator about raising a daughter in a future world that still has hope”, that features an “enchanting art-style, and a smooth instrumental soundtrack inspired by Japanese City Pop”. It will be released this Fall in Europe and North America.

Following an attack by a destructive alien force that threatens the existence of humanity, a mysterious young girl arrives on ARK-3, a magnificent city built in the sky… Brought into your care, it’s up to the player to take Ciel under their wing, and raise her through the years until she is ready to fledge the nest. Lose yourself in the sights and sounds of the city, and with compelling management gameplay, you can ease into the daily routine by using a helpful schedule to plot activities for Ciel: such as classes and hobbies, or hanging out with friends.

Ciel Fledge (Switch – eShop) comes out this Fall in Europe and North America. The Upcoming Games page has been updated!

Here’s a trailer, some details, and the list of key features for Pawarumi, which is now available for pre-purchase on the Nintendo eShop:

The background story is quite dark. It’s about how Axo – you – the pilot of Chukaru, destroyed every Earth defence while being controlled by an alien entity. The first four levels of the game are actually flashbacks, the last level is your revenge!

Pawarumi, best described as Rock-Paper-Scissors with lasers, is a shoot’em up set in a futuristic, yet pre-Columbian, inspired universe.  The sense of accomplishment in reaching the best ending for the game is just a fraction of what is presented, all of which is set in a 3D world with stunning music and sound to heighten the atmospherics.

The player has only one life in the game, and your shield will reduce strength by a third every time you are hit. Pawarumi features a powerful mechanic called the Trinity. The three basic weapons are controlled by coloured divinities – Condor (laser) is blue, Serpent (Gatling gun) is green and Jaguar (missiles) is red. Enemies you face are powered by the same divinities, and by targeting with the same as them, or different colour, you trigger one of the three bonuses of the Trinity – Boost, Drain or Crush. But be warned, there are both positive and negative consequences.

Shooting with a weapon of a different colour than the enemy will either Drain or Crush. Drain transform enemies’ pain into energy that charges Super Attack. Crush multiplies the damage you deal to enemies by a factor of 1.5. No Frills equals more spills!

Pawarumi (Switch – eShop) comes out on July 24th in Europe and North America. 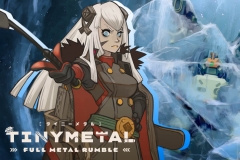 The strength of will is essential to join the Whitefang. A woman with the strength that Wolfram also admires appears in”TINY METAL: FULL METAL RUMBLE”. Victoria is sometimes said to be cruel, but she does so with her justice. Her purpose in the battlefield is …