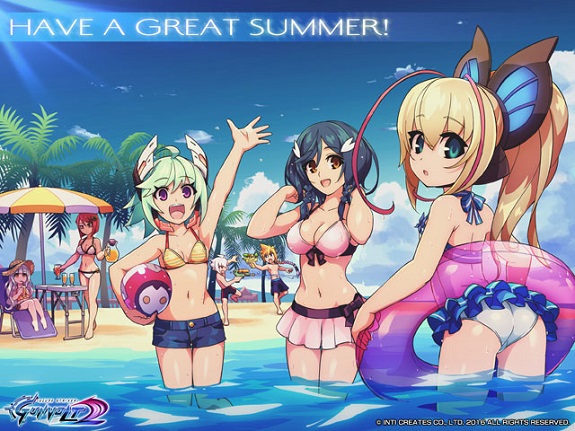 In Japan, the release date of Azure Striker Gunvolt 2 is approaching fast: in fact, there’s only two weeks left until release (on August 25th)! Today, Inti Creates shared quite a few things, including many screenshots from the game. Those showcase the various gameplay systems, such as the skill slots, online rankings, and much more.

But before that, there’s a little goodie for fans who want a new wallpaper for their computer. Today, Inti Creates shared a Summer wallpaper, featuring the heroines of Azure Striker Gunvolt 2. You can find it on the official website in (only) two resolutions:

Next, here’s the latest batch of screenshots for the game:

Finally, here’s a look at the Drama CD and the artbook included in the Limited Edition of the Azure Striker Gunvolt: Striker Pack:

In case you missed the initial announcement (or simply forgot), here’s the contents of the Limited Edition: