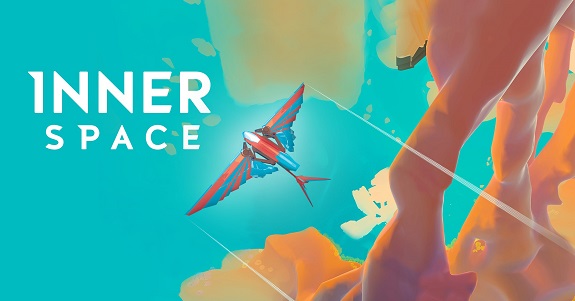 In the past few months, we’ve had tons of new announcements for the Nintendo Switch. Naturally, with the the Nindies Summer Showcase and PAX West last week, the pace of announcement didn’t slow down… quite the opposite! The latest game to be announced for the switching up and coming platform is InnerSpace!

InnerSpace is an exploration flying game, set in a world where physics are inverted, where you get to explore various interconnected, inverted spheres. Each one is an interior world of once-inhabited islands, surrounded by water. In those worlds, gravity pull outwards, away from the center.

In this game, you play as the pilot of an agile aircraft and unnamed cartographer, who decided to go and explore those mysterious bubble-worlds. During this unique journey, you will have to collect relics, and you will get to encounter the patron deity of each “bubble”. All this will allow you to learn more about this unique unierse, its history, and even its future.

A game about experience

InnerSpace is a game about exploration and discovery. It’s about both small and grandiose moments, all of which are player-driven, leading to a narrative that reveals itself to the player at his or her pace. Take your time, and the world’s secrets will reveal themselves to you.

Explore by both air & sea

By engaging “diving mode,” the plane transforms and dives into the water, allowing you to explore the depths of the bubbles’ seas.

Throughout the environment lie relics, remnants of the past. Each relic reveals key information about the civilizations that once were, as well as what role you may have in the bubbles’ futures.

Interact with the environment

Break through walls, cut down structures, and discover the effect you have on many other parts of the world to open new areas and discover new secrets.

The history of the world is held within the relics, which portray the meaning behind larger events. Whether the Cartographer finds and scrutinizes over every relic, or ignores them all, is up to you.

And here’s a teaser trailer (not from Nintendo Switch version) and some screenshots:

InnerSpace (Switch – eShop) comes out on October 10th. The Upcoming Games page has been updated!