Today, Nintendo finally opened the full official website for Xenoblade Chronicles 2 in Japan, providing us with plenty of additional details, but also quite a lot of gameplay footage, some pictures, and more.

First, let’s start with the gameplay footage. We went and grabbed all videos, and merged them into a single one, for your viewing convenience:

And here’s some pictures from the main page of the official website (nothing really interesting, so keep reading!).

The game takes places in Alrest, a world located in a sea of clouds, where the World Tree can be found. A long time ago, mankind used to live on that tree, alongside the Architect (the God said to have created the world). It was a true utopia, where people could live a peaceful live, in a land of plenty. They called it Elysium.

But one day, mankind was driven out of that paradise, for unknown reasons. Did they occur the wrath of the Architect? The problem was, mankind could not survive long in Alrest, and so when it seemed makind was on the verge of annihilation, the Architect had mercy and sent the Titans to save it. Only a small number of people eventually survived until the arrival of the Titans, and those who did went on to live on them.

Fastforward many years later, and the very Titans who once saved mankind are about to die (of old age). And so begins the journey to find another paradise, for mankind to survive.

Rex is a young scavenger, who left his hometown in order to settle on the back on a Titan he calls Gramps (its real name is Azurda). He makes a living from the various materials and other treasure from ancient civilisations that he finds in the sea of clouds.

One day, he finds Pyra (a mysterious Blade) in a ship. But right after that, Jin (from Torna, a secret organisation looking to capture Pyra to further their own goals) appears and kills Rex on the spot. Fortunately for him, Pyra offers him half her life force, allowing him to come back to life. In exchange, Rex has to bring her to Elysium, the fabled paradise.

As a Driver who shares Pyra’s fate, Rex then works towards fulfilling her wish and finding Elysium. But on the way, the pair will have to deal with the many people trying to capture Pyra for their own goals, but also the conflicts opposing the various nations of the world.

As mentioned above, the game takes place in Alrest, a world located in a sea of clouds. Giant lifeforms known as Titans live there, and mankind actually lives on those very Titans. Unfortunately, they are now extremely old, and about to die (when that happens, they sink into the sea of clouds). Naturally, such a dire situation is creating tension among the various countries around the world, as mankind is once again facing extinction.

Here’s details about the various Titans (from the English website):

Just like the previous two Xenoblade Chronicles games, Xenoblade Chronicles 2 offer various quests. You can get them from the many people living on the different Titans, by talking to them. Those task you with defeating enemies, collecting items, finding people, and more.

From Collection Points, you can get various items: plants, minerals, etc.. Those are required for quests, creating Rare Blades, and more. And from Salvage points, you can get some treasure, which happens to be unique to each Titan.

There are special individuals who can create and use the power of living being known as Blades: they’re called Drivers. Blades provide weapons and powers to Drivers, and together, they share the same fate.

The act of creating a Blade is called Tuning, which happens when the Driver touches a mysterious crystal known as “Core Crystal”. As mentioned several times before, the appearance, abilities, attribute, and even name of Blades is randomised. The only exception: Rare Blades, with a special appearance and stronger abilities than regular Blades.

But Tuning is just one aspect of Blades. Once they’ve been created, Blades can be strengthened via various methods. Here’s some more details about that:

There’s a lot of Blades to get in the game, and while a character can have up to 3 Blades at a time, you will eventually be faced with a problem: you will end up with too many Blades, not knowing what to do with them. And that’s where the Merc Groups system kicks in: you can set unused Blades to Mercenaries units, and then send them on missions. This allows them to earn some precious XP, and they bring back money and items.

Here’s details about the main characters found in Xenoblade Chronicles 2:

Here’s some characters from the Kingdom of Uraya:

Here’s some characters from the Empire of Mor Ardain:

And finally, here’s characters from Torna:

Drivers can use up to 3 Blades in Battle (with the exception of Rex, who can have 4… thanks to Pyra and her alt form!). Blades support Drivers (who fight on the front line) by providing them with both weapons and powers.

There’s three types of Blades in the game:

Depending on the Blade you choose, you get access to different Driver Arts. It’s pretty important to switch Blades, in order to use the one that’s the most efficient against the enemies you’re facing.

Here’s some of the actions you can perform in battle:

Naturally, by chaining attacks, you can deal even more damage:

Finally, in Japan, Nintendo will release an Expansion Pass Download Card on December 1st. It’s a download card for the Expansion Pass, allowing people who do not like to make purchases on the internet to buy it at their local (convenience) store instead of the Nintendo eShop or an online store like Amazon. It costs the same price as the pass (check out this post for more details about the Expansion Pass and DLC). 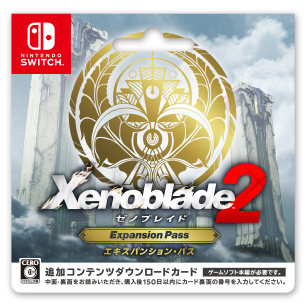