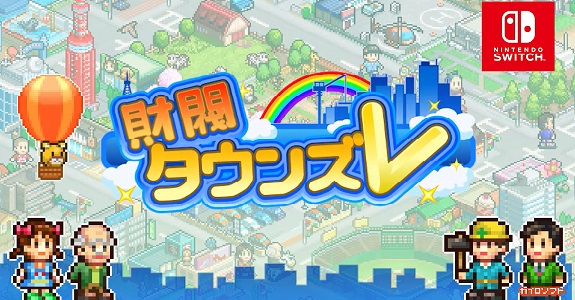 Earlier this year, Kairosoft released some of their most popular games on Nintendo Switch: Game Dev Story, Hot Springs Story, and Dungeon Village. If you’re a fan of their games, you’re in luck: another one is on the way to the Nintendo Switch: Venture Towns, releasing on December 20th in Japan (with digital pre-orders going live on December 13th).

For those who never heard of this game before, here’s what it’s all about:

Assume the reins of a mega-conglomerate to build your very own metropolitan utopia!

Stores, houses, mansions–towers! The sky’s the limit as you fashion your humble burg into the world’s most powerful fiscal force! Place compatible structures near each other to craft specialty districts or “combos,” adding flavor to your town while reaping big bonuses and boosting Land Price!

Your beloved residents will live their lives on the map of your choice, working to earn their daily dough to buy cars, houses, and even pets! Some might even hit the lottery jackpot…

Spearhead the most daring economic venture to date! Craft the urban dreamland of your fantasies!

And finally, here’s some screenshots from the mobile version of Venture Towns (which served as base for this Nintendo Switch port, if the previous Kairosoft releases on Nintendo Switch are anything to go by):

Venture Towns is slated for a December 20th release in Japan, and should be released on the same day in North America (and maybe Europe too) since the game is already available in English and the previous Kairosoft titles received a simultaneous release in Japan and North America.

Venture Towns (Switch – eShop) comes out on December 20th in Japan. The Upcoming Games page has been updated!