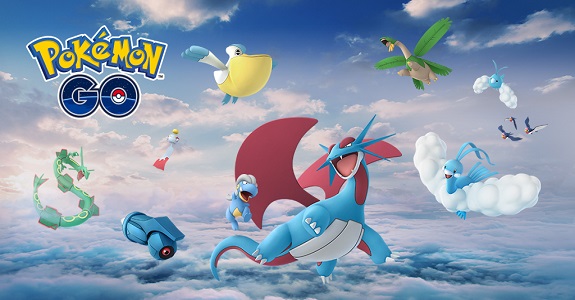 Starting today, more Pokémon from the Hoen region are available in Pokémon GO: Rayquaza (appearing in Raid Battles until March 16th), but also several Flying and Dragon-type Pokémon (such as Salamence, Altaria, and Metagross).

To celebrate this new batch, Pokémon from that region are taking over wild encounteres until February 13th. Also, don’t forget that Kyogre is still available, but you have until February 14th to try and get it! Finally, Niantic reveals that different Pokémon might appear in Raid Battles, and from hatched eggs.

But that’s not all: starting today, and until February 23rd, special boxes including Raid Passes, Incubators, and Star Pieces can be found in the in-game store. As for Lure Modules, they will remain activated for 6h.

Due to a bug introduced when changes were made to EX Raid Battle invites, in order to improve Trainer and Gym selection, some trainers were invited to participate in an EX Raid Battle at a Gym they may not have visited in several months.

This was quite the issue, because it basically “hid” the way the new process is intended to function. The bug has now been fixed, and invites are only sent to players who have completed a Raid Battle at that Gym.

Here’s the various changes made to the invitation process:

Today, Niantic announced another special event for Pokémon GO in Unibail-Rodamco Shopping Centers throughout Europe. Until February 26th, players visiting them will be able to take advantage of the Lure Modules and PokéStops activated there from 9AM to 9PM every day.

Also, during the next Community Day (on February 24th), there will be special accomodations (Lure Modules, exclusive Team Lounges, special giveaways) for trainers looking for Dratini at the following shopping centers: