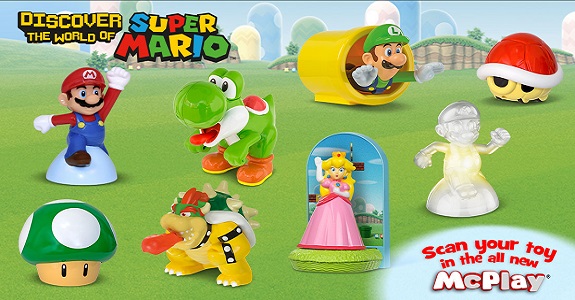 Today, McDonald’s announced a new promotion called Race to 100 Sweepstakes. From April 25th to May 22nd (only in the United States), you will be able to try and win one of 100 “packs” including a Nintendo Switch and a copy of Mario Kart 8 Deluxe. How? By using the McDonald’s app, and scanning and purchasing any item (with Happy Meals giving you 2 entries instead of just one).

And in case you’re wondering: yes, there’s only 100 packs for the entire country, so only 2 per State (obviously, that’s not how the packs are distributed: it’s a pure luck-based lottery system). You can find more details about the promotion on this website!

If you want to take part in the Race to 100 Sweepstakes but don’t want to buy anything, you can do the following:

Interesting details: McDonald’s is the sole sponsor of this promotion, which means that Nintendo did not provide the consoles and games

Also, here’s pictures of the Super Mario toys coming soon to Happy Meals in the United States (previously available in other countries such as the United Kingdom):