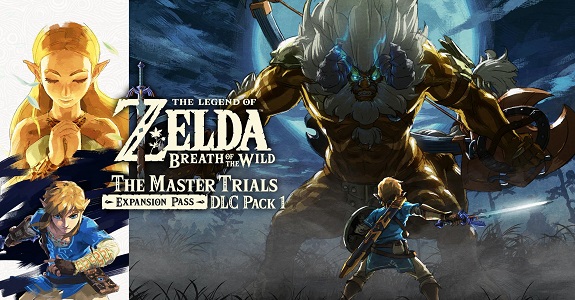 Today, during the Nintendo Spotlight presentation at E3 2017, Nintendo shared a new trailer and some details about the Expansion Pass for The Legend of Zelda: Breath of the Wild.

Regarding the second season pass, we don’t really know much about it, but the 4 champions will apparently play a central role. As for the DLC Pack 1, it’s coming out on June 30th worldwide.

Here’s details about both DLC Packs for The Legend of Zelda: Breath of the Wild on Wii U and Nintendo Switch:

The Legend of Zelda: Breath of the Wild game packs countless hours of play into a vast world of discovery. That makes it an ideal foundation for more adventures! If you own the full game, the Expansion Pass grants access to three new treasure chests, DLC Pack 1, “The Master Trials,” and DLC Pack 2, “The Champions’ Ballad,” as they are released.

DLC Pack 1 “The Master Trials” includes Trial of the Sword, Master Mode, Hero’s Path Mode, Travel Medallion, Korok Mask, and eight new pieces of armor, and it will be released on June 30. DLC Pack 2 “The Champions’ Ballad,” includes new challenges of a new dungeon and an original story, and will be released in Holiday 2017. More details of DLC Pack 2 will be announced later.

Also, Nintendo announced that 4 new amiibo in the Legend of Zelda series would be released: Daruk, Mipha, Revali, and Urbosa. Unfortunately, Nintendo didn’t give a release date for them (or the second DLC pack, for that matter), but we’ve already added them to the Upcoming Releases page!

Here’s pictures for the DLC and the amiibo:

And here’s videos from E3: