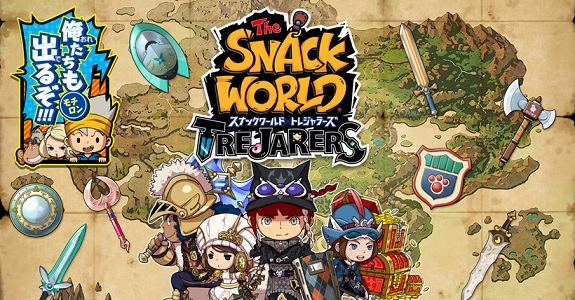 Last week, on August 10th, Level-5 released The Snack World on Nintendo 3DS: the game from their latest cross-media, following the successful Yo-kai Watch. Will it be as successful, though? We will get a (partial) answer later today, with the first sales data for the game!

Just like the variois Yo-kai Watch games, The Snack World comes with a first-print bonus:

But that’s not all: Level-5 also announced that The Snack World was getting some DLC. Here’s details about the two packs announced:

> Check out this post for more details and some pictures!

Pack 2 – The Demon of Destruction! The Advent of Demiglass!!

The two packs will be available for purchase separately, but Level-5 is also offering a Season Pass, which is already available. Naturally, buying the Season Pass now does not give early access to the DLC, which will only be available when it’s released. But as is often the case with Season Passes, the one for The Snack World allows you to get some goodies right away: the Picopico of the Year weapon, and 10 melon bread cookies.

The Season Pass costs 1 500 Yen, which means you save 300 Yen by buying it, instead of getting each pack separately.

The Snack World (3DS) is already available in Japan, with no western release announced so far.